The second generation Lotus elite was a four seater coupe produced by Lotus in the seventies. As you can see in the pictures, the styling was somewhat unconventional but follows the shooting brake concept due to its sporting pedigree and load space.  Once you’ve cleared the vomit off the bodywork the design isn’t as hideous as first impressions lead you to believe! The front end is almost Esprit in design but manages to house the engine despite its steeply raked appearance. Moving back we see pleasing chrome trim on the window surrounds but it does become more boxy from there backwards…  However, it’s from inside the car we start to see sense.  A true four seater, full leather interior with (at the time) a well equipped dash and of course the sensational Lotus experience behind the wheel.  This was a fairly quick car when launched courtesy of the twin cam two litre engine driving the rear wheels and the glass fibre body helping keep the weight down. So if you don’t mind looking like you’ve stolen Dangermouse’s car a Lotus Elite can provide a thrilling yet practical ride. 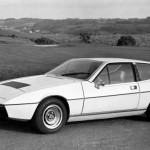 This entry was posted in Classic Cars. Bookmark the permalink.