I’m a big fan of MG and in particular the MGB GT. This is odd since it was fairly underpowered, mechanically antiquated and towards the end of its life largely ruined by British Leyland. But I’m not the only one, the MG was hugely popular despite the above and probably has the biggest classic car restoration following in existence. I can’t really work it out or rationalise it and neither, it seems, could Triumph. Based on the Spitfire and inspired by the racing Spitfires of the sixties the GT6 was a sports coupe launched in 1966 and targeted a very similar audience to the MG. It was well equipped, more powerful and the Giovanni Michelotti body was arguably better looking but it never really sold in the numbers Triumph had hoped for. The GT6 had a straight six, two litre engine and hit zero to sixty in just under twelve seconds. Externally it differed from the Spitfire by having a fixed head coupe body and the bonnet had a ‘power’ bulge to accommodate the larger engine. So far so good, but the weakness of the GT6 was in the rear suspension which was a swing axle setup in the Mk1 but this was remedied in the Mk2 since a more modern wishbone and rotoflex system was used.  The Mk2 also had an up rated engine which gave the GT6 104 bhp and zero to sixty was now around the ten second mark.  The GT6 was redesigned further in 1970 to keep the styling in line with the Spitfire Mk4 but the underlying mechanics were mainly the same as the Mk2.  One reason for the poor sales figures could have been because of the lack of a convertible version of the GT6, presumably to avoid competition with e TR6 roadster also available at the time.  However, the GT6 is strong mechanically and the survival rate of the car is high since there is an enthusiastic classic Triumph following and it now represents excellent value for money.  Although my irrational MG loyalty tells me to stay clear I can’t help recommending the GT6 to anyone who fancies an alternative to the ever-present MGB, a decent example can be found for around 6k. 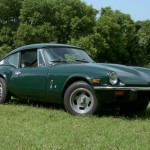 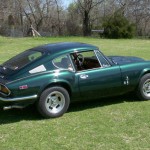 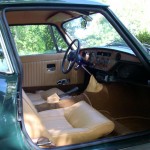